The center of the motion tracking is a modified version of motion. It's a very naive and simplistic approach, but it's also lightweight and easy to setup and customize. As always, it would not be to hard to take this project and switch to OpenCV and do full face tracking or obstacle avoidance.

Here are some shots of the setup. I'll post more with a video later. 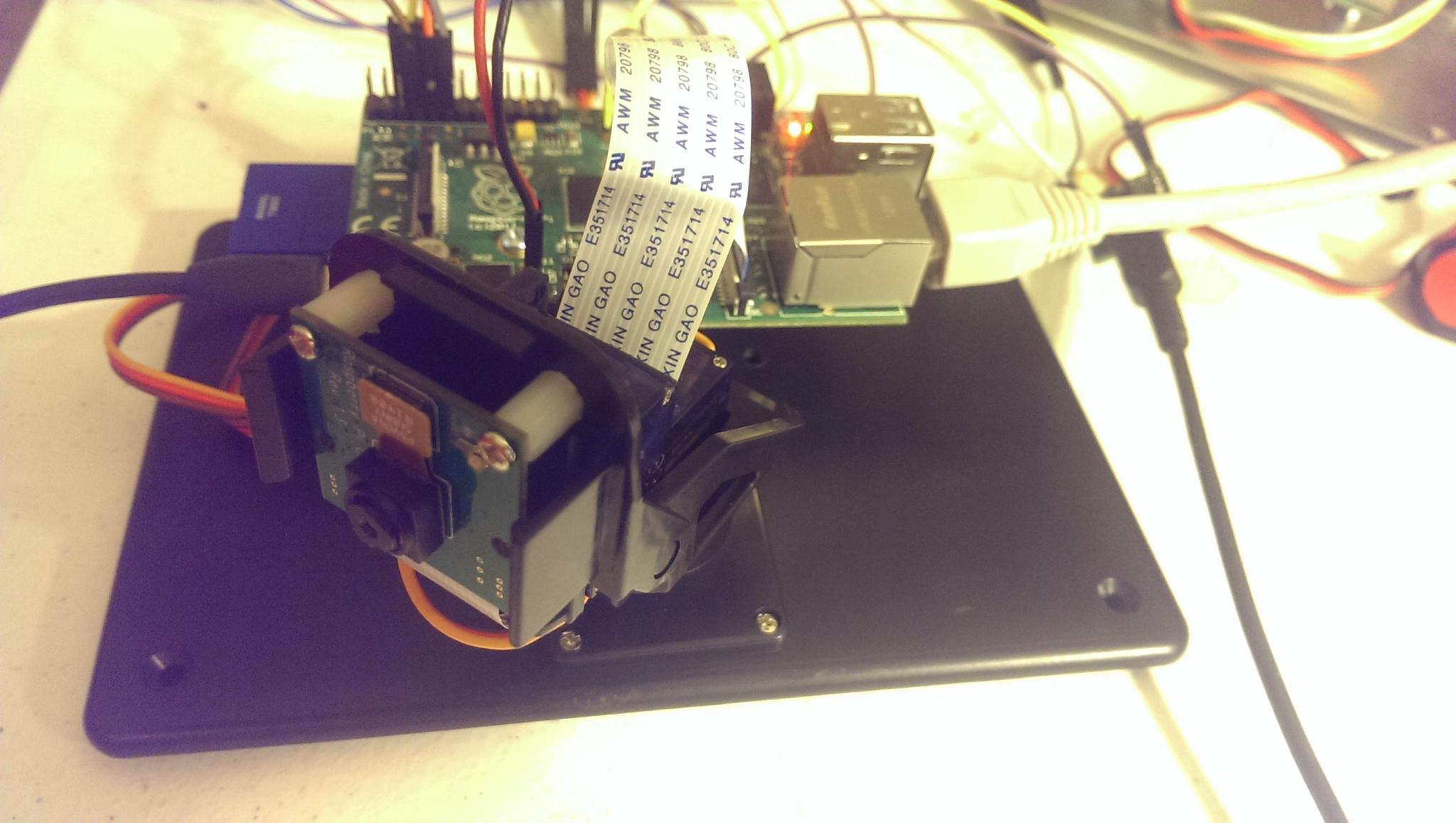 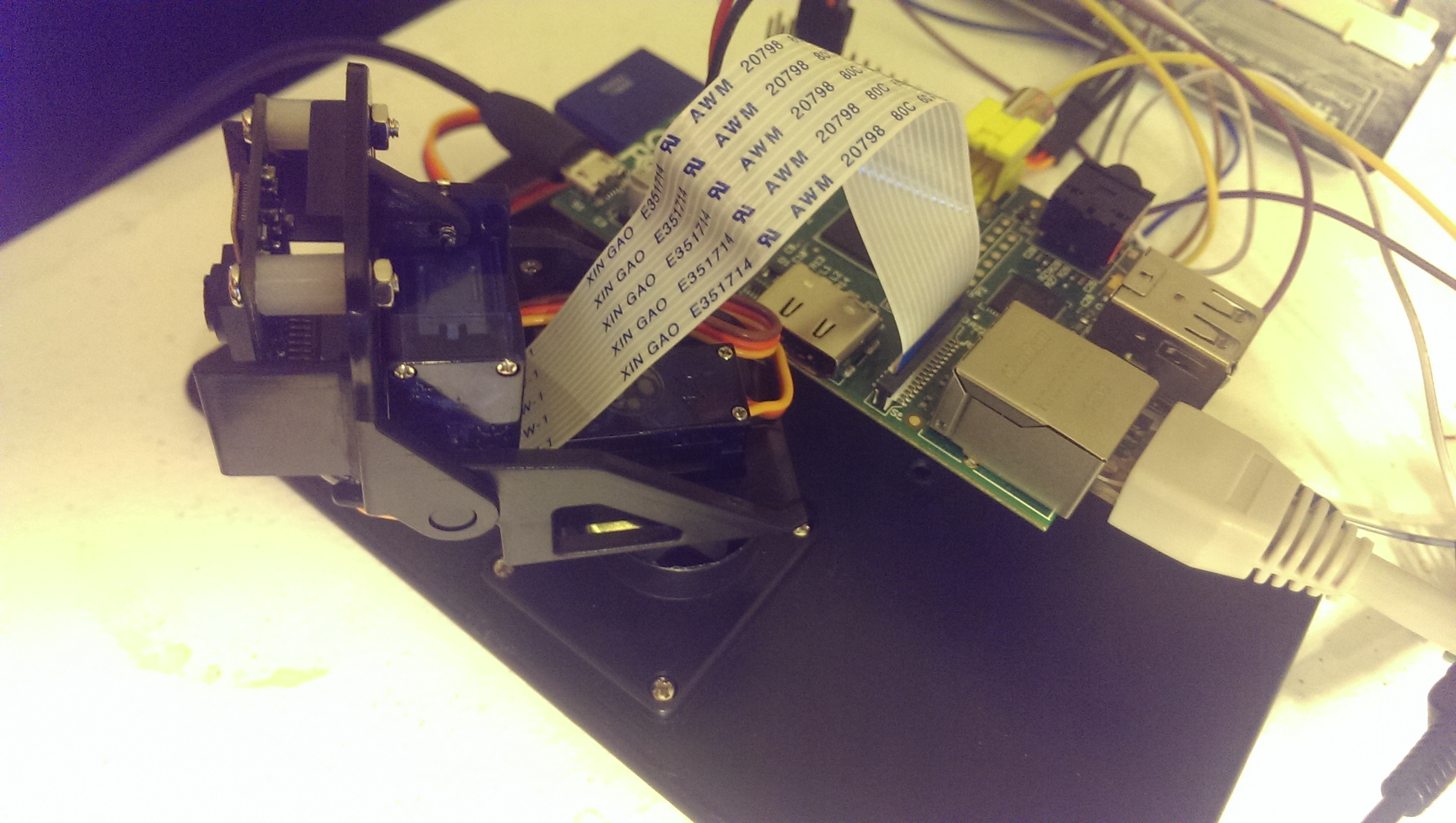 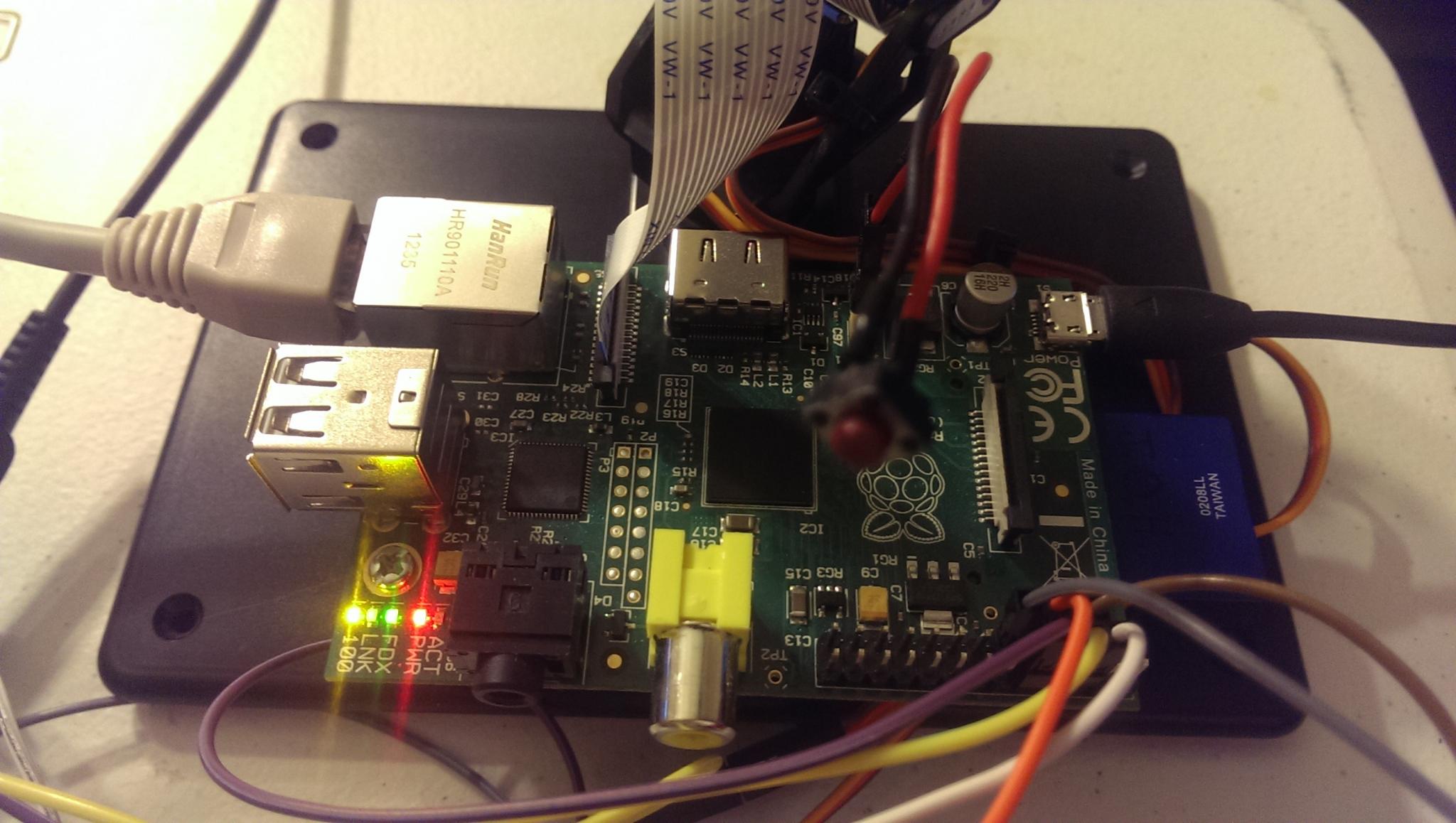 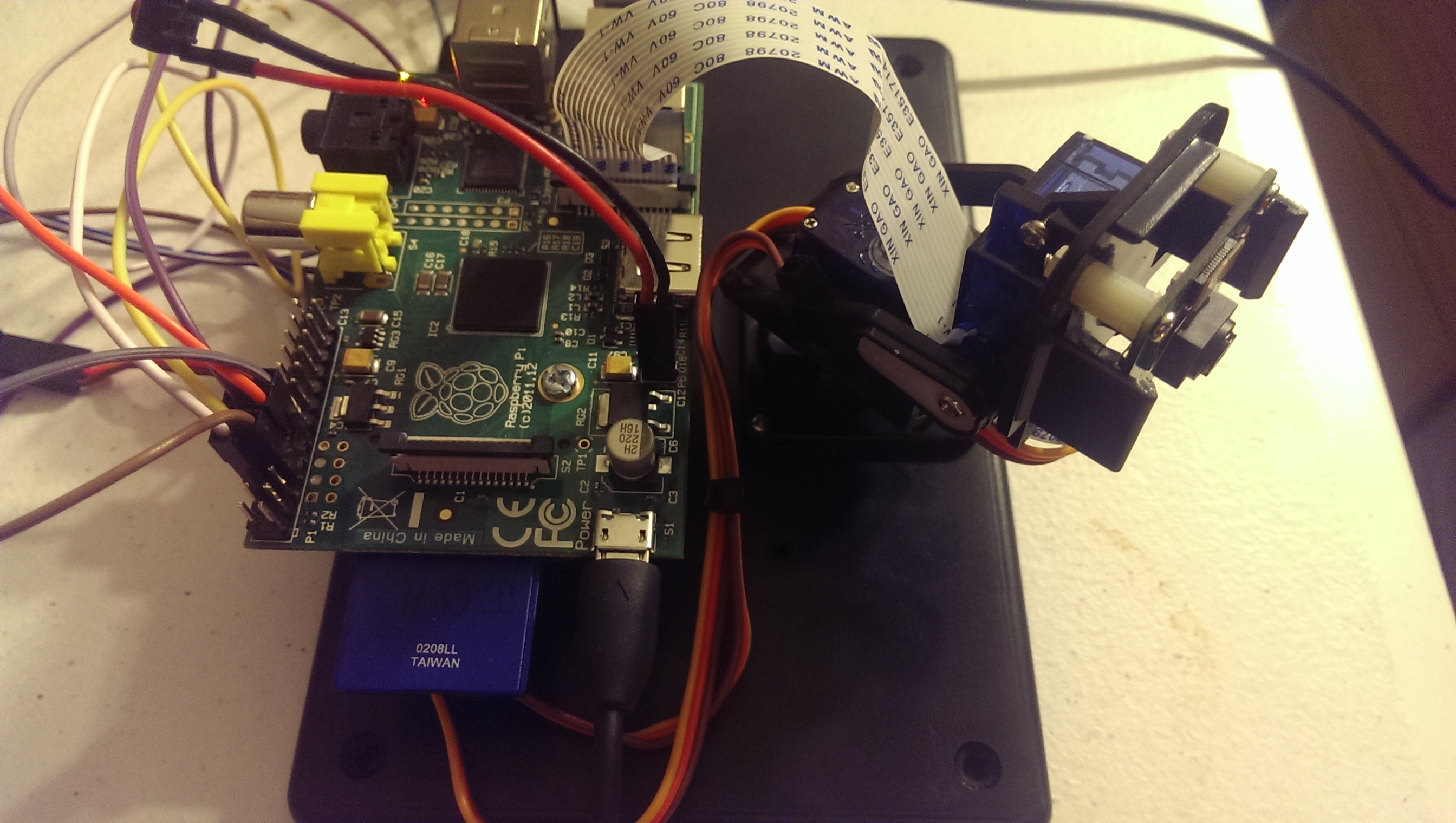 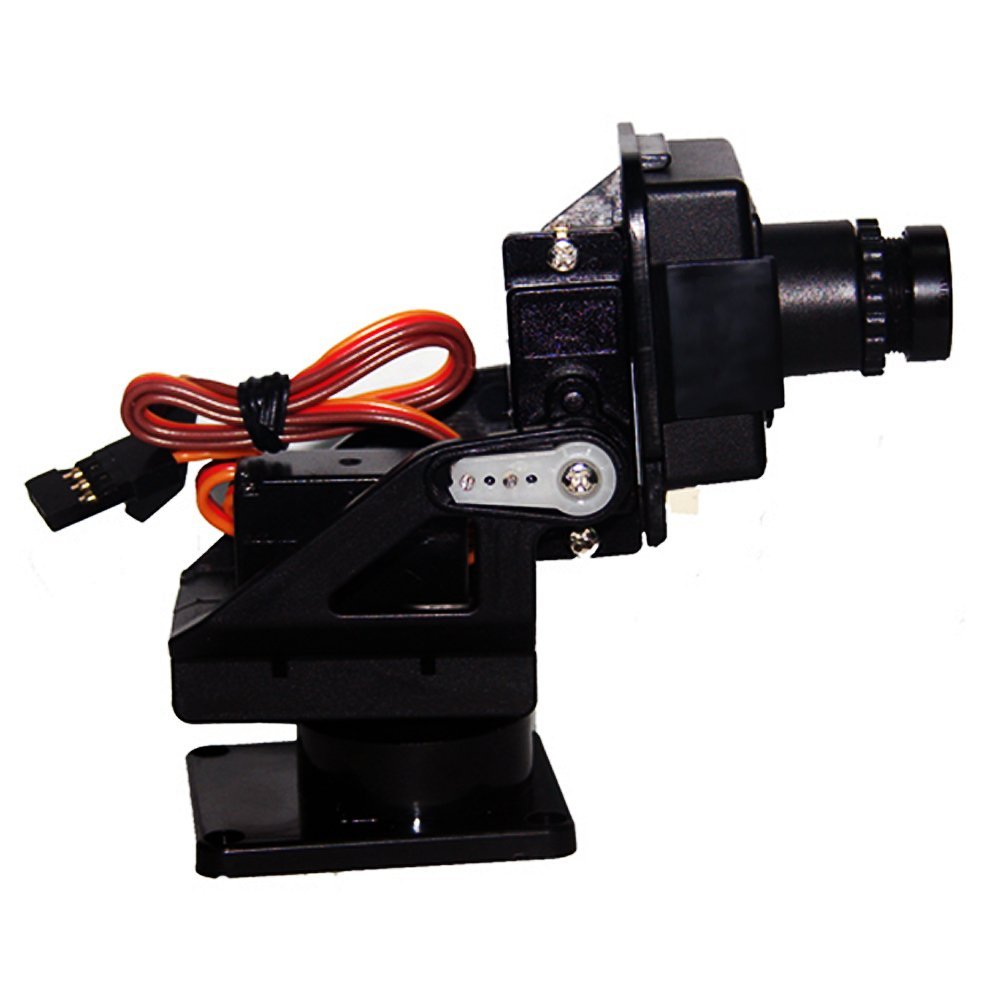 There's not much of a schematic, but here it is. If you were to improve on this, put some isolation between the servos and the Raspberry Pi, but I have not had any problems yet. 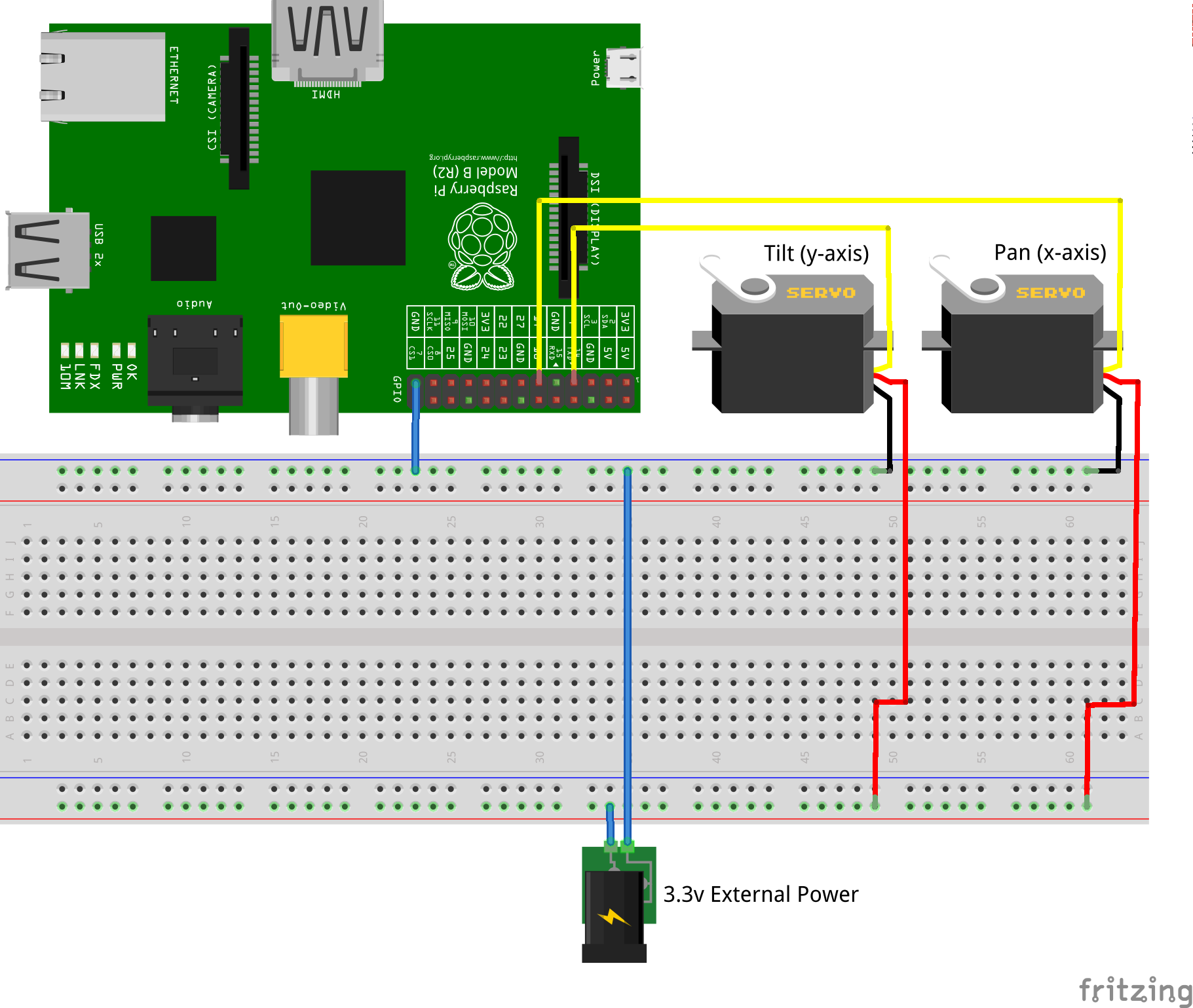 There are two main hardware interfaces: driving the 2 micro servos and handling the camera. It turns out, the camera is well supported as a v4l2 device out of the box with the latest official Raspberry Pi kernel, so the more interesting thing is driving the servos. Driving a standard RC servo is really simple. It's just a simple PWM (Pulse Width Modulation) where the duty cycle controls the position of the servo. The problem is the Raspberry Pi only has a single hardware PWM. Trying to bitbang a PWM in software is out of the question on Linux. It turns out, needing more than one PWM is a common pitfall and many others have already taken to implementing PWM's using DMA to drive many gpio pins. This works really well and I've taken advantage of one of those projects: raspberrypi-pwm.

For building, see the README.

Comment November 2, 2014 by anonymous
Hi very nice working setup. Good work. Just want to add few notes. 1. I made a compilation from your source and possible it is usefully also to share already compiled files - ping me if you want? 2. I suggest to add wlan packages support. 3. I suggest to pack all os into NOOBS fast and interactive menu for loading images and formatting SDs more info here: https://github.com/raspberrypi/noobs In general - well done!
Comment July 24, 2015 by anonymous
Hi Can you share the compiled files, I struck on building the builroot. I am newbie to Linux. I am interested in this project.
Comment January 3, 2016 by rvilsker
I can share - please tell me where to upload.