I recently got my hands on a RT-AC68R indirectly because of a possible snafu at Best Buy on the price. They had it marked down to $119.99.

I have a fairly decent home network setup with a couple NETGEAR WNR3500L routers running dd-wrt (this router also has an open source initiative by NETGEAR). On these routers, dd-wrt easily beats the factory firmware and allows setups not supported. On the Asus RT-AC68R it's a different story. The factory firmware is pretty decent to start with.

I started playing with the settings and only ran into one missing feature: the ability to set hostnames for static DHCP leases. I have some embedded wireless devices that don't allow me to configure the DHCP hostname. For the most part, I could live without some of the other things provided by dd-wrt, but not this one. As it turns out, dd-wrt isn't quite complete for this router, but there's another option: Asuswrt-Merlin.


Asuswrt-merlin takes advantage of the fact that complete source code is available from Asus by building on top of it. Asuswrt-merlin is my personal project, originally done for the RT-N66U, but eventually extended to the RT-AC66U (and on an experimental level, to the RT-N16).

The goal with this project is to provide an alternative to Asuswrt which will benefit from the same rapid development as Asus have for this firmware.


Installing the Asuswrt-Merlin firmware is just like installing factory firmware and as expected it looks and operates the same way. You get extra options like the ability to set static hostnames, SSH access, and dozens of other features not available in the factory firmware. 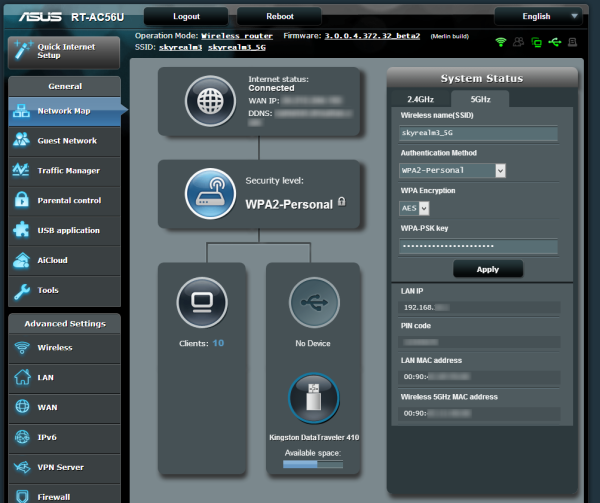 I'm still evaluating, but it's been running rock solid for a couple days now and this is a pretty nice router to begin with.

Here's the overview from ASUS with their flashy technology called "beam forming Scotty." OK, so "Scotty" is not officially part of the name.